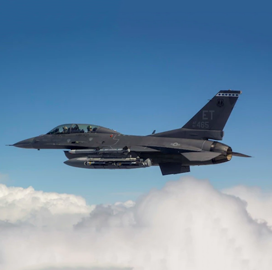 The Air Force Research Laboratory (AFRL) has met all three goals of a flight test that aimed to demonstrate networked, collaborative and autonomous weapons.

CSDB is a modified version of the Boeing-made Small Diameter Bomb I. The test demonstrated that L3Harris Technologies' Banshee 2 radio network can expand its nodes to meet mission requirements.

The demonstration also exhibited how a ground station would transmit an in-flight target update to flying weapons upon the appearance of a new, higher-priority threat. Lastly, two SDB units synchronized to strike a single target together.

Golden Horde supports the military's larger Joint All-Domain Command and Control approach, which seeks to establish a network of situational awareness sensors on the battlefield.