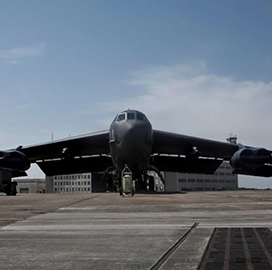 A Boeing-made B-52 Stratofortress stealth bomber demonstrated hypersonic shooting earlier this month during an Alaska-bound sortie that lasted over 13 hours.

The bomber shot a practice target with the AGM-183 hypersonic weapon from a distance of 600 nautical miles during the Northern Edge 21 exercise, which took place on May 5, Air Force Global Strike Command said Thursday.

“We were really exercising the data links that we needed in order to complete that kill chain loop, and then get the feedback to the players in the airspace that the simulated hypersonic missile was fired and effective,” said Lt. Col. Joe Little, deputy commander of the 53rd Test Management Group.

Indo-Pacific Command ran NE21 to train warfighters in realistic scenarios and demonstrate joint interoperability. The exercise commenced at Barksdale Air Force Base in Louisiana, move to Alaska and then returned back to the starting point.