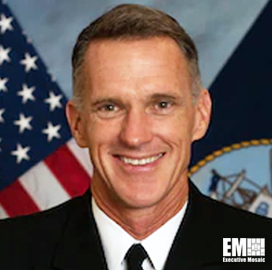 U.S. Navy Rear Adm. William Byrne Jr., vice director at the Joint Chiefs of Staff, will take on a new role as director of warfare development, N72, in the Office of the Chief of Naval Operations in Washington D.C. Top service officials announced Byrne's appointment in a series of flag officer assignments Friday.

He was appointed to his current position in September 2019 and previously commanded U.S. Naval Forces Korea and Carrier Strike Group 11 and CSG 15.

Byrne also held tours at the Pentagon as resource sponsor for the Navy's surface warfare director and as warfare analyst for the warfare integration director, division chief for antiterrorism and force protection programs within the Joint Staff operations directorate and chief of staff for the U.S. 3rd Fleet commander.

He supported Operations Iraqi Freedom and Enduring Freedom during his command assignment onboard the USS Enterprise aircraft carrier and served as assistant director of global integration and current operations at the Joint Staff.

If you're interested in Navy initiatives, check out the Potomac Officers Club's 2021 Navy Forum coming up on May 12. Click here to learn more.