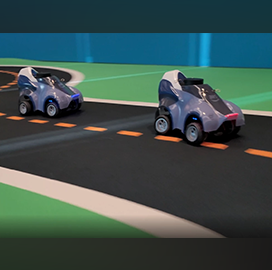 Naval Information Warfare Center Atlantic-led Team DeepBlueSea received the DeepRacer golden trophy after its victory against six finalists from the Navy and seven others from the Army in building the fastest ML-based autonomous race car, Dave Bader, lead business development manager at AWS, wrote in a post Tuesday.

The RL technique worked to assimilate each car with the racing environment through a reward system in which desired actions such as staying in a vehicle lane earn an incentive.

“This event was a great learning experience and one of many ways we will ensure the Navy leverages data and AI to achieve decision superiority in warfighting and business,” said Rob Keiser, a NIWC Atlantic senior scientific technical manager and DeepBlueSea leader.

Sai Liu, a software development lead at Army Communications-Electronics Command, noted that the competition offered basic information on ML that would come in handy should the service pursue the technology in the future.