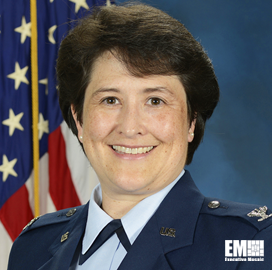 Amanda Kato, program executive officer for nuclear command, control and communications (NC3) at the U.S. Air Force, officially retired from her 29-year military service at a ceremony that took place June 18th at Hanscom AF Base in Massachusetts.

Previously, she oversaw the design, development and production of satellite communications equipment as the senior materiel leader for the branch's $4.6 billion Family of Advanced Beyond Line-of-Sight Terminals program.

Kato also managed the advanced optics and laser initiatives under the Air Force Research Laboratory (AFRL) at the Kirtland AFB and the air combat man maneuvering instrumentation efforts at the Air Armament Center in Florida.

At her retirement ceremony, Kato said that creating partnerships is the top strategy in doing the job and industry partners play an important role in equipping the military.

“I’ve been privileged to work over my career with some great Americans who are committed to solving problems, working through tough issues, and delivering and sustaining important capabilities,” she added.