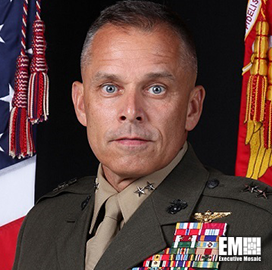 Maj. Gen. Matthew Glavy, head of Marine Corps Forces Cyberspace Command, was nominated by President Biden to serve as deputy commandant for information at the U.S. Marine Corps. He is also in line to receive a promotion to the rank of lieutenant general, the Department of Defense announced Thursday.

The Marine Corps established the deputy commandant for information post in 2017 to oversee the development of plans, strategies and policies for the military branch's information environment. Glavy will succeed Lt. Gen. Loretta Reynolds if the Senate confirms his nomination.

He assumed his current role at COMMARFORCYBERCOM in July 2018 and since then he has managed cyber functions at the service branch, including Marine Corps Enterprise Network Operations (MCEN).

USMC commissioned Glavy through the U.S. Naval Academy in 1986 and cleared him to pilot the CH-46 Sea Knight military transport helicopter after he received his wings in 1988.

He previously held various positions in both the operating forces and the supporting establishment.