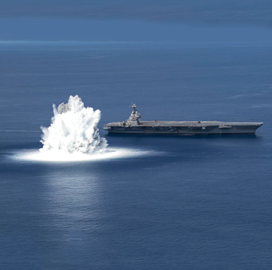 The U.S. Navy kicked off a series of full ship shock trials on Friday to determine whether its Ford-class aircraft carrier could withstand harsh conditions that may arise in a battle mission.

CVN 78, the lead ship of the Navy's Ford-class, is scheduled to enter a six-month planned incremental availability before the carrier reaches the operational employment stage.

The branch conducts shock trials of its surface ships to comply with Office of the Chief of Naval Operations Instruction 9072.2 under the National Defense Authorization Act of 2016.