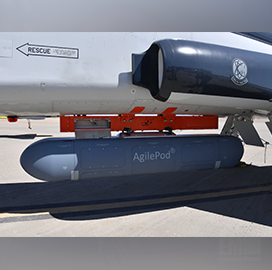 The sorties demonstrated a concept that adapts open-systems architectures with Vision Navigation and other existing PNT technologies.

“This concept recognizes that a single alternative-PNT technology isn’t going to give us the edge against our adversaries as they attempt to disrupt traditional GPS sources; we need to think differently about ways to employ those technologies together to achieve our desired effects," said Maj. Andy Cottle, the operational experimentation lead for complementary PNT at SDPE.

The team also tested the PNT technologies' integration with a T-38 trainer aircraft at Holloman Air Force Base in New Mexico. Future tests under the effort's second phase are scheduled to run in August.