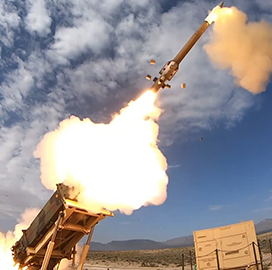 Soldiers participating in the program launched a Patriot Advanced Capability – 3 interceptor to block a missile that was targeting assets, while another missile was electronically attacking radars, the Army said Friday.

"The ability to integrate joint weapons and sensors with Army platforms on a single fire control network is a game-changing capability that is one step closer to being delivered to our warfighters,” said Col. Philip Rottenborn, program manager for IFMC.