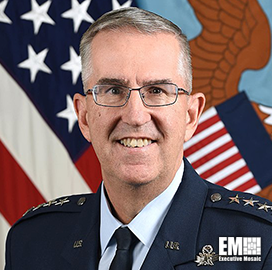 He said expanded maneuver highlights the need for DOD to understand how adversaries operate across all domains and how to deter them while safeguarding Pentagon and coalition forces.

Hyten said there are four functional combat areas within expanded maneuver and those are contested logistics, joint fires, joint all-domain command and control and information advantage. With JADC2, he said there should be a flow of data everywhere.

“The goal is to be fully connected to a combat cloud that has all information that you can access at any time, any place … to be able to act quickly on that,” Gen. Hyten said during his remarks at the launch of the National Defense Industrial Association’s Emerging Technologies Institute.

Under the joint fires concept, he said services should be able to fire from all domains while making it impossible for adversaries to defend themselves against those fires.

“That’s a purely aspirational requirement, but I hope everybody can see that if you could do that you would change the equation on any future battlefield,” Hyten added.

The Potomac Officers Club will host a virtual event on JADC2 on Aug. 31. Register here to join POC’s Building the Future Battle: The Keys to JADC2 event and learn more about the fundamental principles and systems needed to advance JADC2 implementation.