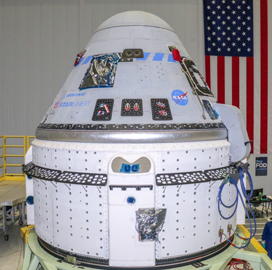 Boeing's CST-100 Starliner spacecraft has passed the launch readiness review phase, clearing the way for the company to launch its second uncrewed flight to the International Space Station as part of NASA's Commercial Crew Program.

NASA expects the Boeing Orbital Flight Test-2 (OFT-2) mission to provide data the agency will use to evaluate the capability of the crew module to ferry astronauts to space.

The spacecraft will carry an anthropometric test device, nicknamed Rosie the Rocketeer, to study what astronauts would experience during flight and over 400 pounds of cargo and supplies to the orbiting laboratory.

During OFT-2, Starliner will test various spacecraft capabilities such as a vision-based navigation system, an automated retreat feature and avionics, electrical power and propulsion technologies.

Five to 10 days after docking with the ISS, Starliner will aim to bring over 550 pounds of cargo back to Earth and land in the western U.S. NASA said that a manned flight test could take place at the end of 2021 should Starliner complete the objectives of the upcoming mission.