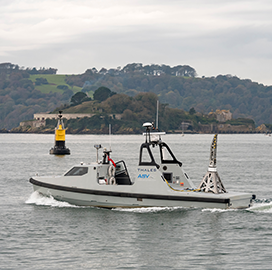 The U.S. Navy is interested in a USV platform that can carry various payloads, be assembled in less than two hours and be reused with minimal maintenance, Naval Sea Systems Command said Tuesday.

NUWC Division Newport partnered with Rhode Island-based nonprofit organization 401 Tech Bridge to organize the competition, which the Navy said is open to both domestic and international entities.

"These Prize Challenges are a way to crowdsource a solution to a Navy problem with a rapid timeline for a response, an evaluation and money going to companies who best meet the Navy’s requirements," said Steve Bordonaro, director of NUWC Newport's Northeast Tech Bridge.

Navy officials will use the written challenge submissions, due Sept. 13, to select sources for a potential follow-on other transaction prototype award valued at up to $1 million.