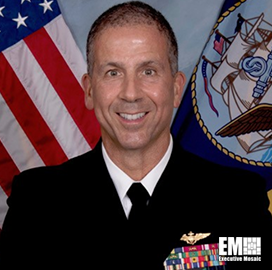 Navy Rear Adm. Carl Chebi, deputy program executive officer for the Joint Strike Fighter, has been nominated by President Biden to serve as the next commander of Naval Air Systems Command (NAVAIR).

In line with his nomination, Chebi will also be promoted to the rank of vice admiral, the Department of Defense said Monday.

Chebi served as the Navy PEO for command, control, communications, computers and intelligence and space systems from February 2017 to September 2019 and held a short stint as vice commander of NAVAIR.

From 2014 to 2016, he was program manager of the Naval Integrated Fire Control/Counter Air system and led engineering, integration, test, fielding and training efforts for the branch's air warfare systems.

Chebi has logged more than 3,700 flight hours and 700 carrier arrested landings with various military aircraft platforms. His awards include the Distinguished Service Medal, Legion of Merit and the Meritorious Service Medal.

He holds a bachelor’s degree in computer systems engineering from the Rensselaer Polytechnic Institute and an executive MBA from the Naval Postgraduate School.