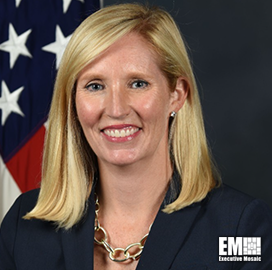 Amanda Toman assumed the role of acting principal director for 5G initiative at the Department of Defense (DOD) following Joseph Evans' departure from the role within the Office of the Undersecretary of Defense for Research and Engineering in mid-August, FedScoop reported Tuesday.

The temporary Pentagon 5G lead has worked the department for over a decade now. She was a program manager from December 2010 to May 2020, and has served as 5G initiative director since then, according to her LinkeIn profile.

Prior to joining the government, Toman was with Science Applications International Corp. (SAIC) for more than three years. As program analyst, she was responsible for leading several research and development projects, analyzing novel armor materials for various applications and engaging customers and government users, among other tasks.

If you're interested in the fifth generation wireless technology, then check out the Potomac Officers Club's Fall 2021 5G Summit on Sept. 16. The event will feature a NextG and space insfrastructure-focused discussion that Toman will join as one of the panelists.

Click here to gain additional information about the summit and visit POC Events page to learn more about other GovCon-related gatherings.