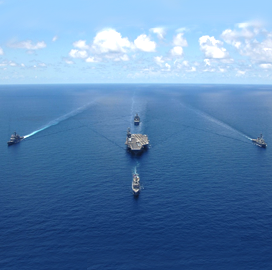 A Congressional Budget Office (CBO) report estimates that the U.S. Navy’s fiscal year 2022 shipbuilding plan to increase its fleet size to between 398 and 512 crewed ships and unmanned vessels would cost approximately $25 billion to $33 billion in 2021 dollars annually over three decades.

CBO said Thursday the figure reflects an increase from the average annual shipbuilding cost of about $23 billion over the past five years.

According to the report, the Navy’s 30-year shipbuilding plan would lead to a reduction in the number of vertical launch system cells used for holding and firing missiles on naval ships, but the number of crewed ships and unmanned vessels capable of carrying such VLS cells could jump by nearly 70 percent.

CBO analyzed the Navy’s shipbuilding plan submitted by the Department of Defense to Congress and found that the number of manned vessels would increase to between 321 and 372. The service branch also envisions a force of between 77 and 140 unmanned vessels.

Under the FY 2022 plan, the Navy’s future fleet of aircraft carriers would include 9 to 11 ships. The service also envisions a force of 12 ballistic missile submarines and a fleet of between 66 and 72 attack submarines.

The military branch would increase its force of small surface combatants to up to 45 ships, up from the current fleet of 31 littoral combat ships and mine countermeasures vessels.