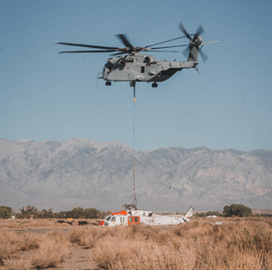 The U.S. Marine Corps demonstrated the use of the CH-53K King Stallion helicopter for aircraft recovery missions, with a test that took place on Sept. 5.

The King Stallion lifted and recovered an MH-60S Knighthawk from the White Mountains of California as part of an official heavy-lift mission, Naval Air Systems Command said Thursday.

Marine Operational Test and Evaluation Squadron One or VMX-1 handles USMC's heavy-lift capability, which is currently under initial operational test and evaluation.

“VMX-1 received a request for assistance from the Naval Safety Center about an MH-60S Knighthawk that suffered a hard landing near Mt. Hogue, Ca., at an elevation of 12,000’ mean sea level in July,” said Lt.Col. Luke Frank, a detachment officer in charge of VMX-1's CH-53K operations.

CH-53K is designed to lift almost 27,000 pounds and carry that weight across 110 nautical miles. Sikorsky, a subsidiary of Lockheed Martin, produces the CH-53K helicopter.

“After six months of flight operations with the CH-53K, the detachment had every confidence in the aircraft’s abilities to conduct the mission safely," Frank added.