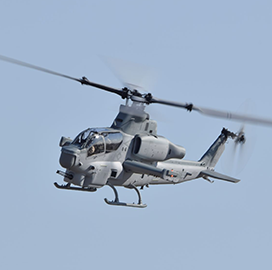 Naval Air Systems Command has received its 100th delivery of the AH-1Z Viper attack helicopter, which Is intended for use by the U.S. Marine Corps. AH-1Z is designed to perform armed reconnaissance, close air support, armor penetration and anti-air operations, NAVAIR said Friday.

“Of all of the domestic AH-1Zs delivered to date, 91 percent of them have been on time,” said Col. Vasilios Pappas, program manager for NAVAIR's PMA-276 unit.

The government may add 34 more units to its existing AH-1Z orders, which have consisted of both domestic and foreign military sales. AH-1Z operates as the attack counterpart of the UH-1Y Venom, which focuses on utility.