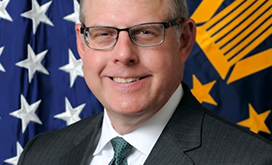 John Sherman, principal deputy chief information officer at the Department of Defense since June 2020, has been appointed to serve as the Department of Defense CIO on an acting basis. He will oversee DOD's information technology operations until the Senate approves a permanent replacement for Dana Deasy, who stepped down from the CIO position when President Biden's administration officially began on Jan. 20th.