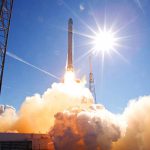 NASA has published its space exploration roadmap for the next several years, detailing efforts that will transition human space-based activities from low-Earth orbit towards the moon, Mars and beyond. The roadmap, referred to as the National Space Exploration Campaign, is the agency’s response to the challenge put forth by President Donald Trump’s Space Policy Directive-1 as well as the requirements itemized in the National Aeronautics and Space Administration Transition Authorization Act of 2017.