May 7, 2019 News Comments Off on Navy Announces Name of New Arleigh Burke-Class Destoyer 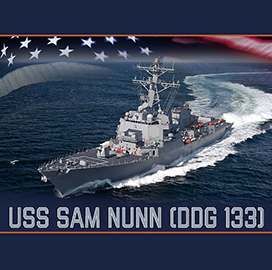 The U.S. Navy named an Arleigh Burke-class guided missile destroyer after a senator who served on behalf of Georgia for over 20 years. USS Sam Nunn or DDG 133 will be a 509-foot-long destroyer designed to travel at speeds over 30 knots, the service branch said Monday. Nunn, the ship's namesake, contributed a year of active duty service to the U.S. Coast Guard and remained a reservist for eight years before his appointment as congressman in 1968.