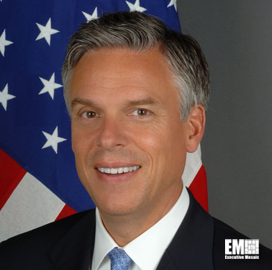 Nick Gass writes Huntsman called last week’s indictment of five Chinese nationals for cybertheft a largely “symbolic” gesture that will not gain much traction in stopping similar activities in the future.

“We’re not going to make any headway on this until such time that we really target market access in this country,” Huntsman said told ABC.

He added that there should be clear-cut legal definitions of “espionage” and “IP rights.”

“What it does, it gets to the heart and soul of innovation and trade secrets and the creation of new industries in America, that we do better than anybody else. And it’s really hard to put a price tag on innovation,” the former diplomat explained.

“At some point, we have to start getting serious about how we respond, beyond just symbolic measures,” he said.

Reports have indicated the hacking charges the Justice Department filed on May 19 have drawn the ire of Chinese officials and state media and may have sparked a backlash affecting U.S. companies that do business there.