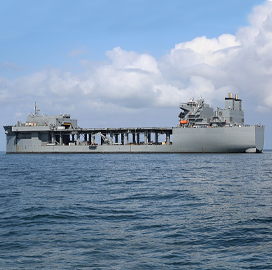 The U.S. Navy has commissioned Expeditionary Sea Base Hershel "Woody" Williams as a naval warship, shifting the vessel's role from a Military Sealift Command unit. The recommissioning changes the ship's designation from USNS to USS, the U.S. Marine Corps said Monday.

Hershel Woodrow Williams, a retired USMC officer and the ship's namesake, delivered an address on the ship's potential contributions as a naval ship.

“I’m grateful to all those who have the expertise to put something like this together,” said Williams, who is a Medal of Honor recipient.

As a naval warship, USS Hershel "Woody" Williams may now support a wider range of maritime warfare missions. The U.S. Navy announced earlier this year that it plans to commission all expeditionary sea bases as naval ships.