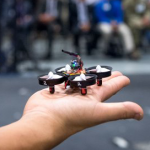 The U.S. Army has concluded an autonomous micro-robotics research project that involved collaboration between the Army Research Laboratory and multiple industry and academic partners over the past 10 years.

The Micro Autonomous Systems and Technology program was completed during a capstone event which featured 17 demonstrations and presentations of ground and air micro-robots, the Army said Monday.

“I believe this is going to be a tactical offset strategy for the Army — the miniaturization of the robotics, the combination of large and small platforms, what it brings to the networking, what it brings to sensing and the ability to go fast in complex environments,” Sadler added.

The Army plans to establish a new collaborative research alliance that will focus on distributed collaborative intelligent systems and technology.