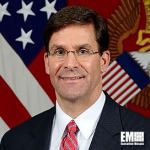 Esper noted during a Senate Armed Services Committee hearing on acquisition reform the Army looks to cut the requirements development timeline for typical acquisition programs to approximately one year from its current average of five years.

“The process now to acquire something is maybe 10 to 15 years … It used to be five to seven … So our aim would be to get it back to where it used to be as a starting point,” said Esper.

He added the Army will implement eight directives designed to modify and update its capability and material development, requirement development, contracting, sustainment and evaluation processes.

The Army also looks to utilize soldier involvement on the evaluation of prototypes to collect input that can help determine potential changes to the technologies’ design or requirements, the report noted.