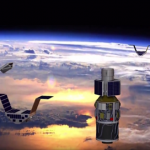 NASA has scheduled Dec. 12 as the date it plans to launch a constellation of small satellites that will work to predict storm surges and track hurricane intensity.

The space agency said Friday the Cyclone Global Navigation Satellite System will launch from Cape Canaveral Air Force Station in Florida and will be composed of eight microsatellites designed to measure and track surface wind speeds over the oceans.

Each CYGNSS satellite works to gather four wind measurements per second, according to NASA.

“There’s a gap in our knowledge of cyclone processes in the critical eyewall region of the storm – a gap that will be filled by the CYGNSS data,” said Chris Ruf, principal investigator for the CYGNSS mission and professor at the University of Michigan’s department of climate and space sciences and engineering.

The University of Michigan’s space physics research laboratory oversees the execution of the CYGNSS mission in collaboration with the Southwest Research Institute.

NASA and the University of Michigan began development work on the CYGNSS satellite network in August 2015.

The space agency said it plans to use an Orbital ATK-built Pegasus XL rocket to bring CYGNSS to low-Earth orbit.