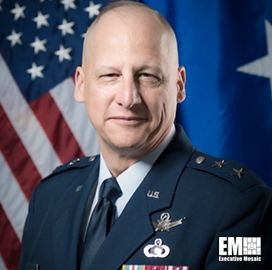 The command will also perform on-orbit checkout for these systems and oversee the Space Force's science and technology projects. USSF's Space and Missile Systems Center, formerly part of the U.S. Air Force, will function as SSC's core.

“Space Systems Command is about continuing the culture shift away from being service providers to being warfighters and defending our way of life from, through and in space,” said Guetlein, who was promoted to a three-star military officer on Friday.

He will lead a 10,000-man workforce of both military and civilian personnel and oversee 85 percent of the Department of Defense's $11 billion space budget. Guetlein helped manage NRO's tactical and strategic operations and led the agency's Space Force-related activities in his former role.

If you're interested in learning more about the military's space goals, check out GovConWire's Space Acquisition Forum on Sept. 14th. Register here.