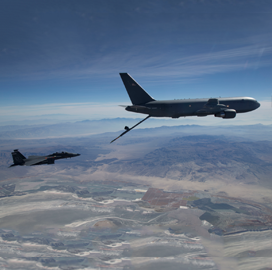 Boeing has been awarded a $2.1 billion contract to deliver 15 KC-46A tankers to the U.S. Air Force, the company reported on Thursday. With the award, the U.S. Air Force will expand its fleet of aircraft, which will help enable the integrated digital battlespace.

“The KC-46’s adaptability is going to be a game-changer for the U.S. Air Force,” said Jamie Burgess, Boeing KC-46 tanker vice president and program manager. “We know our defense customers will need to transform how they fight and win in the modern era. That’s why Boeing is focused on making sure the KC-46 grows and changes with them.”

Boeing’s KC-46 will connect air forces to data needed to maintain the decision advantage and increase success rate on the battlefield. The KC-46 has been designed for state-of-the-art air refueling, cargo and medical transport. Boeing is now on contract for 94 KC-46A tankers.

In April 2020,  Boeing and the U.S. Air Force have agreed to incorporate the final design for the remote vision system into KC-46A Pegasus contract requirements. The agreement calls for the implementation of the RVS 2.0 technology with a laser ranger designed to measure distance of the refueling aircraft, larger operator screens and 4K-color cameras

Leanne Caret, president and CEO of Boeing’s defense, space and security segment and a 2020 Wash100 Award recipient, said the advancements are intended to prepare the tanker for future functions such as autonomous refueling and to support other programs as well.