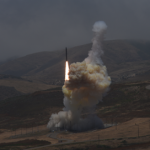 MDA said Tuesday a land-based interceptor that launched from Vandenberg Air Force Base in California used its exo-atmospheric kill vehicle to intercept and destroy an intercontinental ballistic missile that took off from a test site on Kwajalein Atoll in the Marshall Islands.

During the test, the GMD system devised a fire control strategy to intercept the ICBM target through the use of tracking data received from the Command, Control, Battle Management and Communication platform.

The Sea-Based X-band radar system located in the Pacific Ocean also assisted the GMD platform to acquire data and monitor the target.

MDA will use the data from the FTG-15 test to further evaluate the GMD system’s performance.