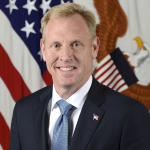 At the Pentagon, he told secretaries and undersecretaries of military services and other defense officials that he will continue the efforts set by former Secretary Jim Mattis under the national defense strategy. Shanaha also called on the officials to keep their focus on China’s growing threats to the U.S.

The call comes as the 2018 National Defense Strategy identifies Beijing as well as Russia among the biggest threats to the U.S. military due to their rapid development of new weapons and defense systems. However, the acting secretary did not mention Moscow in his discussion about “great power competition.”

Prior to taking office as DoD acting lead, Shanahan expressed interest in modernizing the military and investing in advanced space technologies and hypersonic weapons to deter foreign threats, particularly China. He is leading reorganization efforts at the Pentagon to establish President Trump’s proposed Space Force.