CBO: Naval Aviation Fleet Replacement Would Cost $380B Through 2050 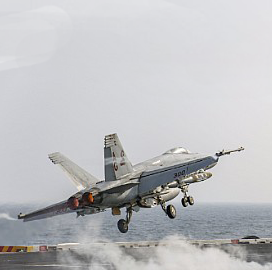 The Congressional Budget Office predicts that the Department of the Navy would spend around $380 billion for new aircraft over the next 30 years. CBO said in its report published Monday that the U.S. Navy and Marine Corps may incur $7 billion to $17 billion in annual costs to maintain the composition and size of the naval aviation fleet.

The report also states that the replacement of attack and fighter aircraft would account for $190 billion of procurement costs within the 2020 to 2050 period. CBO predicts that costs would temporarily decease after 2030 when major programs such as the MV-22 tiltrotor aircraft ends, and rebound in the mid-2030’s when the new cycle of aircraft replacement begins.

According to CBO, the Navy and Marine Corps may opt to procure less expensive aircraft or put off replacement plans for F/A-18E/F fighter jets and MV-22B tiltrotors in the future.

DON currently has a fleet of around 4,000 aircraft, including fixed-wing, tiltrotor, training, cargo, utility and surveillance aircraft.