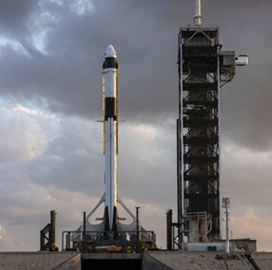 Walter Lauderdale of the U.S. Space Force’s Space and Missile Systems Center (SMC) said the center has decided to allow SpaceX to recover a Falcon 9 booster after months of examinations and reviews of the rocket’s mission data, SpaceNews reported Sunday.

SpaceX is set to launch a GPS satellite aboard its Falcon 9 rocket on Tuesday, June 30, from Cape Canaveral in Florida and perform its first attempt to carry out booster recovery during this second GPS launch mission.

Lauderdale, chief of the Falcon’s systems operations operation division at SMC’s launch enterprise, told reporters Friday during a call that vehicle modifications and extensive assessments “reduced uncertainty in many areas.”

“SpaceX used the experience of our first launch campaign together to improve their processes,” he said. “This led to a 40 percent reduction in the number of questions we presented to them.”

SpaceX will use a new booster for Tuesday's launch and is under contract to perform three more GPS launch missions in the next few years.