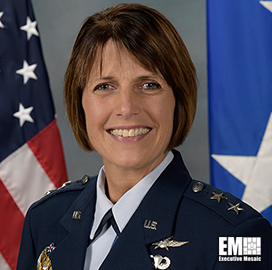 Maj. Gen. Kimberly Crider, acting chief technology and innovation officer for the U.S. Space Force, said the service is set to publish its 2020 science and technology roadmap and recognizes the need to work with industry to bring that plan to fruition, SpaceNews reported Wednesday.

“We agree with the industrial base report,” Crider said of the “State of the Space Industrial Base 2020: A Time for Action to Sustain U.S. Economic & Military Leadership in Space” report released by the Defense Innovation Unit (DIU) and the Air Force Research Laboratory (AFRL) in July. “We have to coordinate with industry and other government leaders.”

She said Wednesday at the Ascend virtual conference that the service branch backs the idea of establishing “unity of effort” across industry, academia and government to incentivize the industrial base.

Crider cited examples of technology areas where the Space Force can work with industry, including satellite-based communications, power generation in space, space transportation, logistics and positioning, navigation and timing.