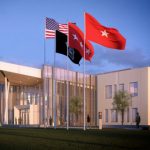 The U.S. Army has broken ground on a new facility at Fort Gordon in Georgia designed to combine the service branch’s cyber, education, training and capability development operations.

Fanning said the new facility seeks to maintain the military branch’s readiness and serve as a “warfighting platform for cyber space operations.”

The Army expects the project’s first phase to conclude in May 2018 and the second phase in early 2019.

The new cyber complex is scheduled to be operational in 2020 and will house over 1,200 cyber servicemembers and civilian employees.