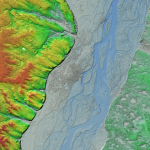 The National Geospatial-Intelligence Agency has collaborated with the National Science Foundation, University of Minnesota and mapping technology company Esri to map the entire Arctic region.

“These models and this data provide greater context for the Arctic and will greatly assist a wide array of decision-making,” said NGA Director Robert Cardillo, an inductee into Executive Mosaic‘s Wash100 for 2017.

Cardillo added the public-private collaboration has made “open, high-resolution, satellite-based elevation data of Alaska and the entire Arctic available to inform policy and decisions in an increasingly critical part of the world.”

NGA released the Arctic DEMs for analysis and production in the government, academic and commercial sectors.

Hyperion Research honored the agency and its partners on the two-year project with a high-computing user innovation award.