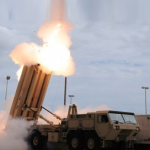 “It’s just a matter of the location, and the MDA making a recommendation as to which site meets their criteria for location, but also the environmental impact,” Rep. Mike Rogers (R-Alabama) told Reuters at the Reagan National Defense Forum in California.

Rogers, chairperson of the strategic forces panel within the House Armed Services Committee, added that multiple sites are vying for the anti-missile system installations.

Reuters reported that Rogers and Rep. Adam Smith (D-Washington) also identified the Lockheed Martin-built Terminal High Altitude Area Defense system as the potential platform that the government is eyeing to establish on the West Coast.

MDA is yet to receive an order to install THAAD in the region, MDA Deputy Director Rear Adm. Jon Hill‎ commented to Reuters.