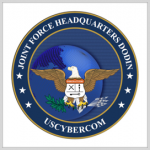 A U.S. Cyber Command component has reached full operational capability status after three years of establishing capacity and capability to operate, defend and secure the Department of Defense Information Network.

“A highlight for me was to see the organization take the reins of actively defending the DoDIN in real-world threat and attack conditions,” said U.S. Army Lt. Allan Lynn, commander of the joint force headquarters.

U.S. Navy Rear Adm. Kathleen Creighton, deputy commander at the JFHQ-DoDIN, said he observed progress in the organization’s performance in multiple areas during 2017.

The command added it will organize DoDIN into multiple operation areas through the Operation Gladiator Shield effort.