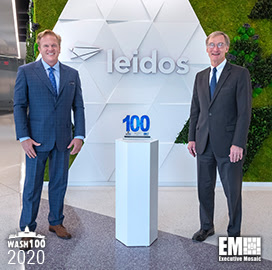 Roger Krone, chairman and CEO of Leidos, received his seventh consecutive Wash100 Award for driving company growth through the acquisitions of Dynetics as well as L3Harris security detection and automation businesses.

Krone is the only recipient, since the Wash100 Award’s inception in 2014, who has won the award seven consecutive times. His vision, commitment to growth and success in government contracting (GovCon) demonstrates the level of excellence that Krone upholds every year to earn the most prestigious and coveted award in the GovCon sector.

In Feb. 2020, Krone revealed that Leidos’ had generated $11.09 billion in revenue during its 2019 fiscal year, which was an 8.8 percent increase from 2018, which was attributed to new contract awards, an increase in the volume of programs and acquisitions. 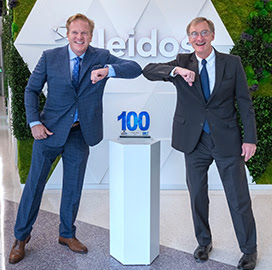 Specifically, Leidos’ defense solutions segment recorded $5.8 billion in revenue of that profit, which was up 8.1 percent from the previous year. That increase was the result of Krone’s efforts to create innovative technology solutions in defense, intelligence, health and other federal markets, which also led to his sixth Wash100 Award win in 2019.

"Our growth and execution momentum accelerated throughout 2019 and has continued into 2020 with significant new program wins and the opportunity to create value from our two recently announced acquisitions," said Krone.

The acquisitions that Krone was referring to was the company’s acquisition of Dynetics in Dec. 2019 for approximately $1.65 billion in cash as part of efforts to expand its portfolio of offerings and further build up its position in intelligence, civil and defense markets.

“The addition of Dynetics will significantly increase our capabilities for rapid prototyping and agile system integration and production, enhancing our overall offerings and services to customers,” Krone explained. 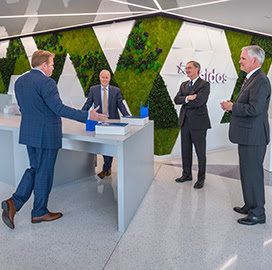 In addition, he revealed that Leidos reached a definitive agreement to acquire L3Harris Technologies’ security detection and automation businesses for $1 billion in cash in Feb. 2020 to add complementary technology and products as well as create a comprehensive security and detection portfolio for the company.

“The acquisition of these businesses will help accelerate our growth and innovation and enable us to offer the market a comprehensive security platform,” Krone added.

Roger Krone’s continued commitment to excellence in the GovCon industry has made him the winningest Wash100 recipient in the award’s history. His unparalleled skills in leadership, innovation, achievement, and vision have cemented Krone as one of the most significant executives of consequence to the GovCon sector and federal market.