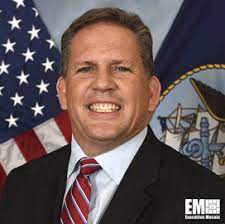 James Geurts, current acting undersecretary for the U.S. Navy and a previous Wash100 Award recipient, announced on Wednesday through a handwritten letter on Geurts’ LinkedIn that he will be retiring from his post at the end of August and will retire from government service.

“It would have been hard for me to imagine when I began as an ROTC freshman in 1983, the incredible opportunities and experiences that would unfold over the next 38 years of my service,” Geurts said in the note.

As of his retirement announcement this morning, the replacement for Navy undersecretary has not been announced. Geurts has been acting in the role since Feb. 2021 after serving as the assistant secretary for Research, Development and Acquisition for the Navy from Dec. 2017 until Jan. 2021.

“I have been truly blessed by the great teammates, bosses, mentors, international colleagues, and industry partners with whom I have had the good fortune to work with in my career as an Air Force officer, [senior executive service] and appointee,” Geurts added.

At the end of August, this portion of “Hondo” Geurts’ incredibly successful career will come to a close, but he will continue to be recognized for his significant contributions. The 2020 Wash100 Award winner was recognized for his visionary leadership and drive to push the military service’s approaches to acquire technology and innovate with industry.

During his time with the Navy, Geurts oversaw a wide range of programs, including the service’s pursuit of unmanned technology, its Naval Expeditions accelerator program as well as the work for the new Constellation-class frigate and the Ford-class aircraft carrier program.

Before his appointment to the Navy, Geurts served as acquisition executive at the U.S. Special Operations Command (USSOCOM) and earned accolades such as the USSOCOM Medal for his accomplishments while serving in that role. Geurts began his career at the U.S. Air Force as an acquisition official with leadership positions in weapon systems engineering and program management.