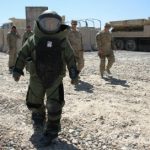 DTRA said Monday it has worked with JIDO on the transition since December 2015 to help both organizations support frontline warfighters and address both weapons of mass destruction and improvised explosive devices that terrorists seek to use.

“While we may have different focus areas, both our missions have some overlapping customers, threats and networks,” said Shari Durand, DTRA acting director.

“As we start the learning process and understand more what each organization is doing that’s when I think the greatest capabilities and the greatest synergy will come, and that will benefit the warfighter tremendously.”

DTRA expects the transition of JIDO to foster mission collaboration and work to offer efficiencies over time through the integration of offices in management areas such as human resources, security and counterintelligence, financial management, contracts, facilities and logistics management.

News surfaced in February that JIDA would integrate into DTRA as part of NDAA language that that requires the former to be moved by the Defense Department under the supervision of an existing defense agency or a military department.