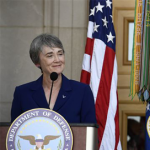 Heather Wilson, a former U.S. representative from New Mexico, was sworn in as the Air Force‘s 26th secretary during a ceremony that took place Tuesday at the Pentagon.

She officially assumed the top civilian post at the military service eight days after the Senate confirmed her nomination via a 76-22 vote.

Wilson brings more than 35 years of leadership and management experience in the military, government, higher education and private sector experience to her new role.

She previously served as president of the South Dakota School of Mines and Technology for four years, a House member from 1998 to 2009 and director for defense policy and arms control at the National Security Council from 1989 to 1991.