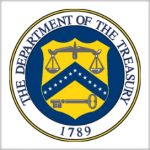 The Treasury Department has blocked from dealing with the U.S. 10 foreign companies and six individuals in response to their involvement in activities that are deemed to support North Korea’s efforts to develop nuclear and ballistic missile programs.

The agency’s actions seek to comply with the resolution enacted by the United Nations Security Council on Aug. 5 as a measure against North Korea’s continued ballistic missile tests, the Treasury said Tuesday.

“Treasury will continue to increase pressure on North Korea by targeting those who support the advancement of nuclear and ballistic missile programs, and isolating them from the American financial system,” said Treasury Secretary Steven Mnuchin.

The department’s office of foreign assets control designated two China-based companies, a Russian company and its director for their links to enterprises and activities that support North Korea’s weapons of mass destruction development programs.

Three Chinese firms, two Singapore-based companies, three Russian individuals and a Chinese business executive were also named for their participation in activities that back North Korea’s coal and oil trade.

OFAC also designated two companies and an individual for their involvement in the exportation of workers from North Korea.