The final frontier might not be so final after all–When an organization like NASA sees the smoke and fire of engines of the Space Launch System, they direct their eyes skyward toward orbital reconnaissance, advanced propulsion technologies in space travel, recovering satellites and next-gen communications, the developing presence of humans aboard the International Space Station, and yes, the extraterrestrial-existential question of “are we alone in the universe?”

According the NASA’s FY2018 $19.1 billion plan the budget supports about 1200 missions, roughly 40 missions preparing for launch, 60 that are operating currently.

Robert M. Lightfoot, Jr., NASA’s acting administrator and highest-ranking civil servant, has the gumption and required thrust to take the future of humanity into the zero-gravity cold-vacuum of space.

“Our work here at NASA leads the world–in size, in scope, in impact,” said Lightfoot during an agency-wide town hall State of NASA address at NASA Headquarters in Washington on May 23. “It’s very important to stay the course, as we are partnering with the FAA and industry partners on unmanned aircraft systems–we have a rising goal of putting humans on Mars and we’re there today with our scientific platforms…We will keep exploring our solar system, beyond and exploring our own planet, our home.” 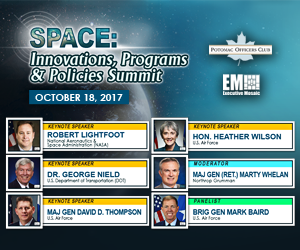 “Teamwork makes dream work.” A NASA-held belief, as Lightfoot and other space-dreamers lay the infrastructure “backbone” in place to allow for deep space exploration as we propel forward into the future.

“We are not a single program or mission–we are a lot of programs or missions, covering a broad spectrum of integrated, strategically, aligned with the Space Act written 60 years ago–2018 is our 60th anniversary as an agency–Yes, some stuff has changed, but for the most part, we have maintained that continuity of purpose over time…This budget continues not only what we want to do as agency, but also several other national priorities, maintaining our place as a global leader in space.”

“[NASA] has a historic and enduring purpose as an agency: discover, explore and develop. These correspond to all our missions of scientific discovery, missions of human exploration, development of aeronautic systems that we do as a nation–we inspire the next generation, inject that innovation into the national economy, provide data to national leaders to solve some of the biggest problems that this nation has, AND we support this global engagement and diplomacy that is so important to the role we play as a primary leader in the international part of what this agency does.”

There is no time to waste, to wait for syzygy, or to revel in past successes–its all about keeping the momentum.

“The president has said: ‘American footprints on distant worlds are not that big of a dream.’ We’re executing programs step-by-step to make this dream a reality and further our understanding of our universe.”

Reaching above and beyond today’s milestones, missions scheduled to fly in 2018 include: Solar Probe Plus; The Transitting ExoPlanet Survey Satellite (TESS), the InSight Mars Lander. Also continued development of the next-gen XPlane, for when we fly in 2021 to really investigate low boom supersonic flight–which could be a tremendous game changer for not only this country, but humanity as a whole.

Sending humans to space is of utmost priority–we just have to get there in stages. NASA had to prove the worth of technologies to lower the risk threshold, adapt to challenges and advance capabilities farther than before.

“On the station, we’re a matter of hours from home. We’re still in the harsh environment of space, but we’re learning a lot about human health in microgravity for long periods…not only with regular duration expeditions but also with more extended stays like the one-year mission currently underway,” Lightfoot said in his remarks to the Space Transportation Association in January of this year. “We’re already on this journey. We’re testing new technologies (e.g. how to grow food in space; perfecting life support systems, mitigating the effects of gravity on the human body and perfecting the human robotic interface) to provide, as the space community, a sustained march forward.”

A quantum leap and fast-forward to the decade of the 2020s: What do we need to be doing that enables us to get humans to Mars in the 2030s? Today’s journey to mars, according to Lightfoot, is that before anything else, “our big ‘M’ Mission to Mars requires that a lot of little ‘m’s’ come together and get refined.

“We call the area around the moon ‘The Proving Ground,’ because it’s where things like solar electric propulsion, habitats and other technologies will be used for the first time in their intended environment. The Space Launch System and Orion will be the backbone of our transportation systems, getting us where we need to be and helping us learn even more about propulsion and rocket systems and a new human-rated vehicle for deep exploration.”

Lightfoot and the NASA forum have always been a torchbearer in lighting the way into the future–however, continued firing of these engines requires energy, time and commitment. There is nothing–no thing–more important than illuminating the what (or the where) of what is outside our atmosphere.

Acting Administrator Lightfoot will be addressing the Potomac Officer’s Club as a keynote speaker at the 2017 Space: Innovations, Programs, and Policies Summit to be held Oct. 18, 2017 at the Ritz-Carlton Tysons Corner in McLean, VA.

Read More:
In the News: Pierre Chao, Founding Partner of Renaissance Strategic Advisors
In The News: Heather Wilson, 24th Secretary of the U.S. Air Force
In The News: Maj.-Gen. Patricia A. Frost, Director of Cyber, Office of the Deputy Chief of Staff, U.S. Army G-3/5/7