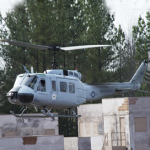 The U.S. Marine Corps has demonstrated an autonomous technology on a UH-1 Huey military helicopter at Marine Corps Base in Quantico, Virginia.

The flight demonstration was part of the Autonomous Aerial Cargo/Utility System partnership between the Office of Naval Research and Aurora Flight Sciences, ONR said Wednesday.

“With AACUS, an unmanned helicopter takes the supplies from the base, picks out the optimal route and best landing site closest to the warfighters, lands, and returns to base once the resupply is complete; all with the single touch of a handheld tablet,” said ONR Executive Director Walter Jones.

The system is remotely controlled through a handheld tablet device and designed as a possible alternative to high-risk convoy or manned aircraft operations.