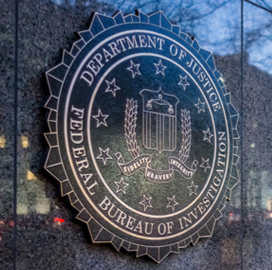 The FBI has sent a letter to Rep. Stephen Lynch, D-Mass., stating that the intelligence community (IC) is committed to sharing cyber threat information to its industry partners.

Jill Tyson, assistant director at the FBI’s Office of Congressional Affairs, wrote a letter to Lynch, who also served as chairman of the House Subcommittee on National Security, in response to the latter’s February letter calling for more stringent protection of U.S. data from foreign interference.

According to Tyson’s letter, the IC "ensures the timely production of unclassified reports” regarding U.S. cybersecurity and coordinates with the Department of Homeland Security (DHS) and Cybersecurity and Infrastructure Security Agency(CISA) to help affected private entities.

Tyson noted that the FBI “routinely shares information” across all industry sectors and maintains direct liaison with companies to ensure that software security updates are released and security incidents are reported.

Industry partnerships are “a key component of the FBI's mission” and the agency works to ensure that its reports on the security of private technologies are relayed to interagency partners to generate actionable information, she said.

“Finally, the FBI encourages consumers to make themselves aware of potential risks and vulnerabilities that mobile applications and social media mechanisms can pose, including risks to exposing sensitive or personal information,” Tyson added.

Previously, Lynch sent separate letters to Apple and Google urging the companies to disclose their applications and technologies that were produced through foreign entities.