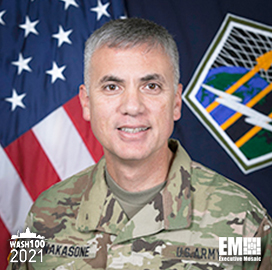 “Competition in the sense of our adversaries, near-peer adversaries, that are looking at being able to operate below the level of armed conflict to do a number of different activities, conducting strategic campaigns against our nation in areas such as cyber security or influence or other areas that impact our economy,” Nakasone said Tuesday at an event.

Cybercom is now preparing to ensure the security of the 2022 midterm elections and Nakasone discussed how the command works to counter cyber threats as more countries attempt to interfere with U.S. democratic processes.

“What has changed with influence in regard to the elections, first of all, there is more than one adversary,” he said. “It began with just the Russians, and now it is the Russians, the Chinese, the Iranians, it is a number of different actors.

Nakasone said the command is working to gather information on threat actors and facilitate data sharing with partner agencies.

“In terms of 2022, our focus right now is obviously being able to generate the insights of what adversaries are doing and who might be doing that. [That focus] will move very, very quickly to being able to share that information with a broad range of partners,” he noted.

Puesh Kumar of the Department of Energy (DOE), MG Maria Barrett of the U.S. Army Cyber Command and CISA Director Lt. Gen. Robert Skinner will serve as keynote speakers during GovCon Wire Events' Cybersecurity in National Security Summit on Tuesday, Sept. 21st to address the threats to our critical IT infrastructure, the major initiatives bolstering the DOD’s cybersecurity and the opportunities for private industry to support the federal government’s cybersecurity objectives.

Visit the GovCon Wire Events page to register for the Cybersecurity in National Security Summit on Sept. 21st.