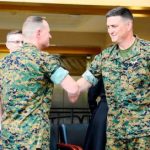 “In addition to the accomplishments of the CMV-22 and the [Japanese foreign military sale] case, the focus of each member of the V-22 Joint Program Office team has been to support the Marines and Airmen in the field through working to increase readiness levels,” Robinson, who will move on to the NAVAIR 6.0 Logistics and Industrial Operations team, said during the change-of-command ceremony Wednesday.

Lt. Gen. Jon Davis, deputy commandant of the Marine Corps for aviation, has noted the service is working to execute the Common Configuration Readiness and Modernization plan to re-baseline the first 129 V-22 units based on a recent independent readiness review.