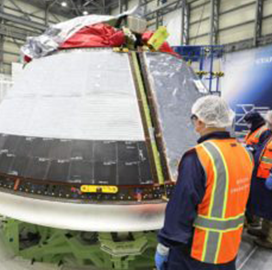 A second uncrewed test flight for Boeing’s CST-100 Starliner commercial crew spacecraft is now scheduled for no earlier than the end of March, SpaceNews reported on Friday. NASA and Boeing announced Dec. 9 that the launch of the Orbital Flight Test (OFT) 2 mission is scheduled for March 29 on a United Launch Alliance (ULA) Atlas 5 rocket from Cape Canaveral.

“The pacing item really is getting the software ready to go,” said Steve Stich, NASA commercial crew program manager, said. “As they continue to make progress on the flight software and the testing of that software, we’ll be able to refine that date a little bit better.”

Boeing had completed more than 90 percent of the recommended actions from an independent review earlier this year of the original OFT mission, NASA stated. “NASA and Boeing are doing a tremendous amount of work on all aspects of their flight software,” Stich said in the statement.

“With each vehicle closeout, line of code tested and document delivered, we’re on a path to proving we have a robust, fully operational vehicle,” said John Vollmer, Starliner vice president and program manager at Boeing.

The CFT mission will fly NASA astronauts Mike Fincke, Nicole Mann and Barry Wilmore to the ISS. NASA and Boeing announced in Oct. 2020 that Wilmore would replace Boeing’s Chris Ferguson.

Wilmore will begin training with his crewmates immediately in preparation for the 2021 flight to the International Space Station (ISS). Boeing will focus on delivering safe, reliable and cost-effective solutions for crew transportation services to and from the ISS.

“My personal thank you to Chris for his leadership; he is putting his family first, which Boeing fully supports,” said Leanne Caret, president and CEO, Boeing Defense, Space & Security and 2020 Wash100 Award recipient, in regards to the appointment. “We are fortunate he will continue to take an active role on the Starliner program and bring his depth and breadth of experience in human spaceflight to the program.”