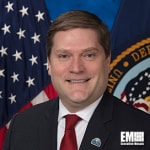 Scott Blackburn, acting chief information officer for the Department of Veteran Affairs, announced his resignation on Tuesday via Twitter.

“This is a bittersweet moment in my career. Today I officially resigned my position at @DeptVetAffairs. It has been the honor of my life. Too many people to thank. Will continue to advocate for #Veterans in other ways. Next stop – time off for a few months :),” Blackburn tweeted.

His resignation comes as the VA transitions to Cerner’s electronic health record system, leading to the sharing of EHR infrastructure and software with the Department of Defense.

In a posted letter, Blackburn offered praise for the agency, saying veteran trust in the VA has increased from 47 percent in 2015 to 69 percent today.

“From leading the MyVA transformation under Secretary McDonald to serving as interim deputy secretary and then acting CIO under Secretary Shulkin, everyone that knows me understands that I have given my heart and soul to VA, always ‘putting veterans first’ and living the ICARE values of Integrity, Commitment, Advocacy, Respect and Excellence,” Blackburn wrote.

“I will remain both VA’s biggest cheerleader and critic from afar. I remain optimistic about the future – as I know that no matter what, VA will continue to be held up by the 360,000 plus dedicated public servants serving Veterans every day so many of which are Veterans themselves; and I know Veterans, Veterans advocates, Veterans Service Organizations, and lawmakers will keep VA leadership in check and accountable,” Blackburn pledged.

Blackburn has served as acting CIO since October 2017, following Rob Thomas’ retirement from the post. In his letter, Blackburn did not give a reason for leaving.