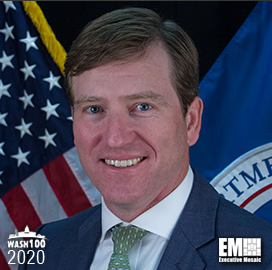 Christopher Krebs, director of the Cybersecurity and Infrastructure Security Agency (CISA), has assured that CISA has increased its information sharing efforts with state officials in anticipation of disinformation campaigns threatening the U.S. presidential election, The Wall Street Journal reported Tuesday.

The Department of Homeland Security's (DHS) cybersecurity arm has also offered to brief reporters to help them identify real and fake threats, in addition to launching a page on the CISA website to dispute allegations such as election hacking by foreign attackers and other known kinds of disinformation.

“We remain confident that no foreign cyber actor can change your vote,” said Krebs, a two-time Wash100 Award recipient. However, he added that threats remain as attackers are expected to try to disrupt polls and "make sensationalist claims" overstating their skills. Other election officials have also shared how they are working to curb election disinformation.

Trevor Timmons, chief information officer for the Colorado Secretary of State, said a team sent out alerts assuring that in-person voting would continue in response to posts on Twitter claiming that state restrictions due to COVID-19 would result in the closure of polling places.